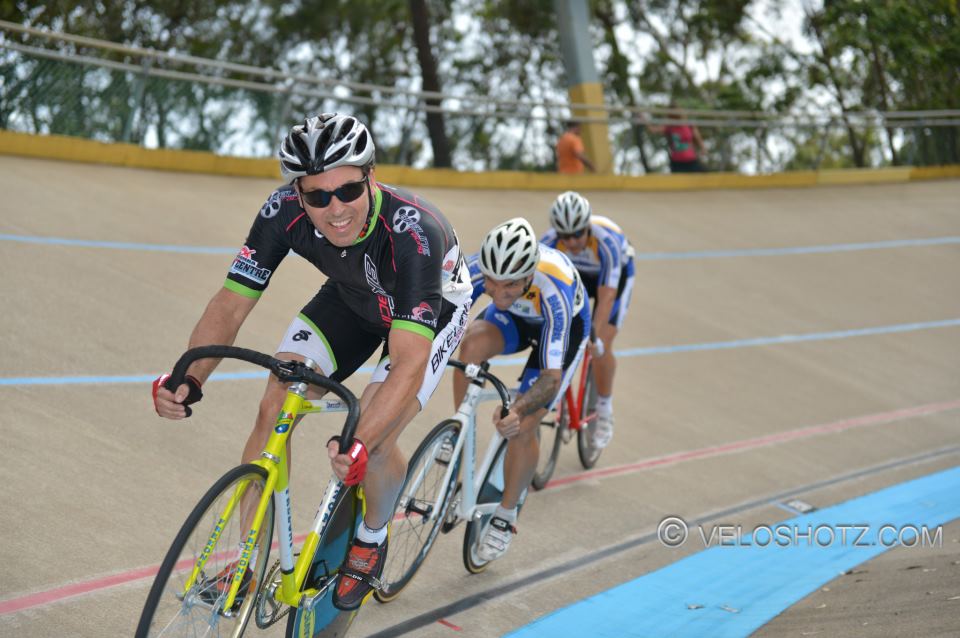 Congratulations to the Bikeline Racing members who participated at the 2013 Queensland Masters Track Championships over the weekend. Again this year the Track Ratz were able to bring home the medals in their chosen disciplines.

MENS DIVISION 5-6 SPRINT (Flying 200) – Karl Morris qualified second with a time of 11.69 seconds, only to be beaten by World Masters Champ Gerard O’Connell who posted a new State Record of 11.49 seconds. Karl then had to face Paul Jackson in the semi-final, where he won both rounds to proceed to the Gold medal round against who else but O’Connell. Karl wasn’t able to top him and finished with a well deserved Silver Medal.

MENS DIVISION 4 SPRINT ( Flying 200) – The original Track Rat, Brian Schmacker, again proved to be too strong with an impressive time of 11.60 seconds; 0.59 seconds quicker then second place! Jon Lindley qualified fourth with a time of 12.71.

Brian’s Quarter Final opponent failed to start so it was easy ride into the semis where he won both rounds to advance to the Gold Medal race. Jon won the first round in the quarters but couldn’t finish it off in the the last two losing out to David may who went on to win Bronze. Brian went on to race against Glenn Searle from Uni Cycle Club and won it in two rounds to take the Gold medal again (just how many is that Brian??).

COMBINED MENS TEAM SPRINT – After last years disappointing disqualification, Brian, Karl and Jon were ready to dish it out in the Combined Mens Team Sprint. They posted the fastest time in qualifying of 1.11.79. This put them straight into the Gold Medal race against HPRW. The boys ran an even faster time of 1.11.54 to earn their Gold medals despite HPRW being disqualified for a changeover infraction.

In other events Brian finished sixth (51.41) in the Mens Division 4 666m Time Trial with Jon two places behind in eighth (52.87). Both finished behind another Toowoomba rider, Gary Kristensen, who rode a 48.21 to take the Gold in his pet event. Gary also scored silver in the Mens Division 4 3000m Individual Pursuit and silver in the Combined Mens 4000 Team Pursuit with his club HPRW.

OTHER TOOWOOMBA RIDERS – Simon Burke, who rides for Uni Cycle Club, had the third fastest time and a new personal record in the Mens Division 1-2 Sprint Qualifying round with a time of 11.74. He made it to the Bronze medal ride where he lost in straight rounds to Patrick Weinrauch from HPRW. Megan Stevens, who rides for the Highfield Rollers , clocked a personal best of 13.48 in the flying 200m.