Sunday July 18th was the day for the 2015 Charles Coin Memorial Classic & Mardi Bartlett Classic events held down at scenic Mulgowie. It was frosty start to the day with many of the early starters unable to feel their fingers while awaiting the starters gun. By the afternoon though the wind and the temperature had risen making conditions fairly tough for all concerned.

This race has become a favourite to many riders, with 300+ starters over the various grades. A good flattish course with some rollers out the back and a slight pinch before the straight finish makes for some good solid racing. The narrow roads on the back side of the course made it interesting at times.

Ben Mackie, Dave Swann, Rob Walker, Tom Galbraith and Tori Watson lined in the Masters C race. Unfortunately due to a clerical error Wayne Cooling was not included in the start list. Rob Walker crashed out on the climb during lap 1, dropping his chain and somersaulting over the bars. He was able to get back on the bike but his seat was loose taking valuable time to fix so Rob’s race was unfortunately over. Tori caught a puncture late in the race which effectively ended his race. 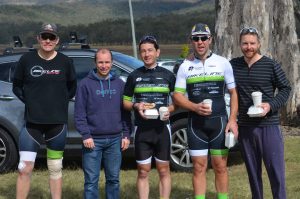 David Swann made a valiant break away attempt 7 kms out from the finish line but was caught by the main bunch on the climb. Tom and Ben finished safely in the bunch, Tom crossing the line a few wheels back from a podium spot in a somewhat crowded bunch finish. A good time was had by the lads. 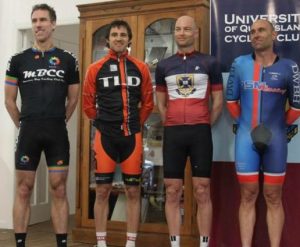 Our Kiwi expat and all round good guy Richard MacAvoy (racing in the TLD colours) took a super impressive 4th place in Masters A in some tough windy conditions. Richard got into a break of 6 riders, and more than held his own over the finish line. Huge effort Richard!!

MTB champ and Bikeline’s new wrench Michael Illing and rising star Daniel Luke competed in the Elite B category, both finishing in the pointy end of the bunch but just out of the places.

Big thanks to Suzy Byron for snapping some great photos and Nick Byron for his efforts as a commissaire throughout the day.

Take at look at the Bikeline Racing album for more photos of the racing. Full list of results can be viewed here.