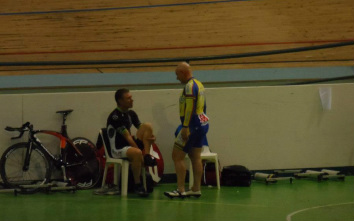 Congratulations to Karl Morris competing in the National Track Championships. Karl qualified third in the sprint behind David Zdanowicz from SA and the World Champion Geoff Stoker from NSW. Karl defeated Michael Eastwood from Tasmania 2-0 in the Quarter Finals then David Zdanowicz 2-1 in the Semi Finals before being overpowered by Geoff Stoker in the Final. Well-deserved Silver Medal. After doing a ‘Wheelie’ on the start of the Time Trial Karl followed up his Sprint Silver with another in the 500m Time Trial.