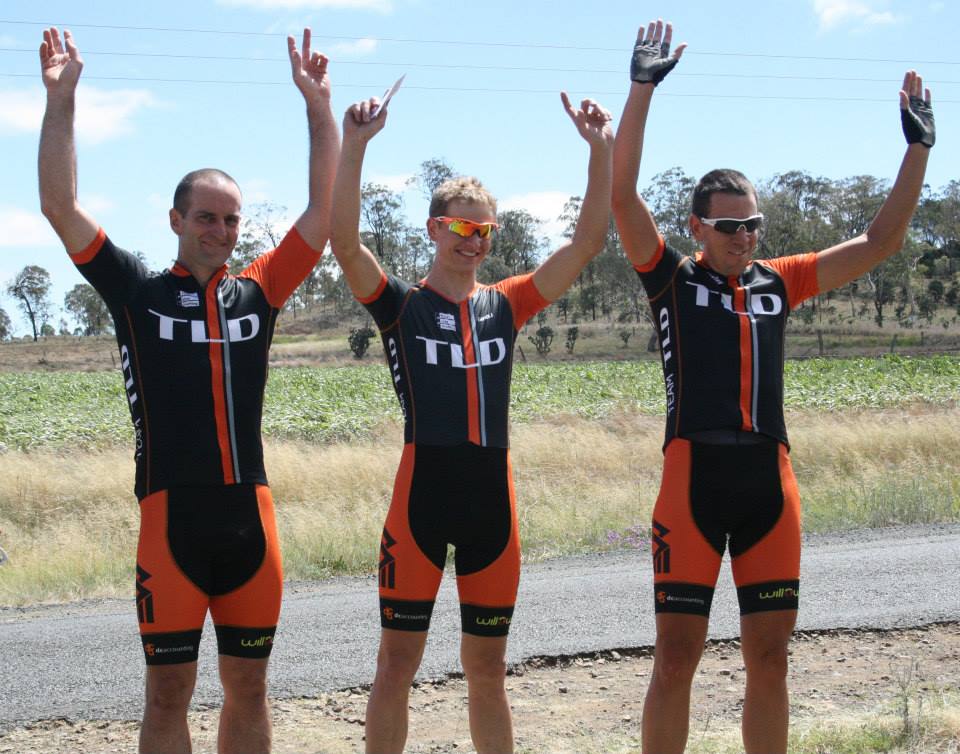 Windy conditions for todays race but thats not new after the last two months of windy weather and on the open flat course it was always going to be who was the smartest or who was the biggest ticker would win.

C and D grade were the first to roll off for the day with D grade only doing one lap of the 20km course and C grade scheduled for two.

(from the lead vehicle…) Mike rode a very aggressive race riding on the front for a lot and attacking at the appropriate moment all the while trying to make sure his young son Hayden stayed with. It wasn’t until about 5 km to go that Hayden gave his Dad the OK to unleash as he was cooked. Jason tried to break Mike and Rob coming into the last the little rise but just couldn’t pull it off.

With twelve riders in B grade and 11 of them riding for Bikeline Racing it was pretty evident that it should be a three riders on the podium from the club. As usual B grade is always an animated race with plenty of riders dishing out the hurt and it is never a foregone conclusion as to who will take it. Club sponsor Matt from McWilliam Sander Accountants earnt the win although there were whispers it was to keep the sponsor happy*.

*Claims may be false and in fact there were no whispers.
A GRADE – 3 laps
1st Chris Maycock
2nd Trent West
3rd Dean Russell

The pace was on from the start with GK hitting the road fast. With only him and Kent riding against seven TLD riders it was an ambitious start. The tailwind soon had the bunch sitting at 60km/hr on the first straight. Towards the end of the first lap Trent West and James Orchard soon found themselves off the front and Dean Russell was quick to jump on as well.

On the second lap, after the first straight CJ Maycock did a massive effort to bridge across to the lead bunch who weren’t slowing down for him. Chris got his breath back and was soon swapping turns with the other three who were putting time into the four behind. Heading back into the wind the last four were working hard to try and close down the gap when there was a touch of wheels and where Aaron Haycock decided to test the toughness of the new TLD kit. This broke the rhythm of the other three and soon the gap was insurmountable to the lead four.

Another lap to do and the lead four weren’t slowing down and in the end CJ was too strong and backed up his win from here last time with another strong finish.

Thanks to Tom for organising and to the commissaries, Glenn, Stacey and Stuart and to the other volunteers on the corners and in the cars.

Thanks to all the riders for making the effort to come race as this is why we do it.

See you next week at the Toowoomba 2 Day.