More thoughts from Bikeline Members from this year’s Charles Coin 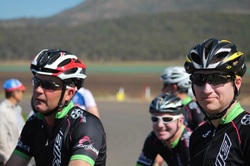 Jon Lindley – “Firstly to me it was all about the journey to the start. Getting a group of like-minded cyclists to have a go at what I have enjoyed doing for years. The response to asking if; emails and communication ; the “team” training rides; the banter and discussions about “tactics”; the beers and coffees post training rides; pre-race breaky and most of all getting everyone to enjoy the lead-up to the event together. Thanks to Moey for starting it.
Secondly I enjoyed was seeing guys and girls new to Open racing mixing with the more experienced riders, enjoying it, supporting fellow riders, riding safely, being competitive and overcoming any fear that they might be “left for dead” and riding alone.

As for me my fitness was shabby so winning was not an option but I lasted a lot longer than I thought. Happy to be a domestique. Well done to Suzie; Nick; Duane; Ben; Heath; Rob for having a first time go at this race. Congratulations to Andrea on her placing. Well done to Heath and Rob who I think top 10 finished. Good to have fellow Toowoomba riders to ride with too; Rod, Adam, Adam, Nick. Steve R and others, hope to see you next “mission”. Charlie, I hope you are reading this. We have talked about a “team” for years, we have one of sorts and you aren’t here!! Better be here for the next one.”

Andrea Gormley – “This year’s Charles Coin certainly threw up lots of challenges for those of us in MastersC/D/Womens race. The pace was mixed with plenty of strong riders having a go off the front, or punishing us up the hills. This year I felt more confident mixing it with the front of the pack and taking turns to set the pace and reel in the breakaways. The last hill on the third lap saw me drop off the main pack due to a bad choice of gearing and some very stressed legs, and it took all my effort to get back on as we passed over the bridge. The fourth lap was fast and furious as everyone was keen to be close to the front but no one wanted to do any work. Again the last hill was nearly my undoing as I struggled to say in touch with the front group of guys. I was so pleased to see the finish line and can honestly say I was totally shattered! And yes i would do it all again! Special thanks to Phil for being our support crew/ coach/ photographer on the day.”

Dean Russell Elite A – A funny old day…
I had pretty good legs. Not great but not bad either. I had almost a week off the bike sick after the Cunningham and I think I could feel a little of that in my form. Anyway…

The day was very warm and there was minimal wind. The course was also fairly straight forward with little challenge in the way of hills or climbs. There was a little berg inside 2km from the finish but it was not really steep or long enough to do much damage.

The pace was up and down but the third lap was very quick (blew the Strava record for a lap of the course out of the water). The bunch had dwindled to sixteen by that point.

A break of four went down the road soon after and I had a team mate there, so it was effectively tools down for me right there. That break established a good lead and stayed away until the finish (my team mate came second).

On the last lap a split in what was left of the bunch happenned with another four riders going off the front. I considered going with that group but made a mistake and stayed in the bunch (I didn’t think they would stay away). I chased hard but we missed making contact with the second break by about thirty seconds. There were only six of us left sprinting for 9th and I ended up 11th.

I’m actually disappointed with this. I had better legs than 11th in this race and I am very hungry for better results in Elite A.