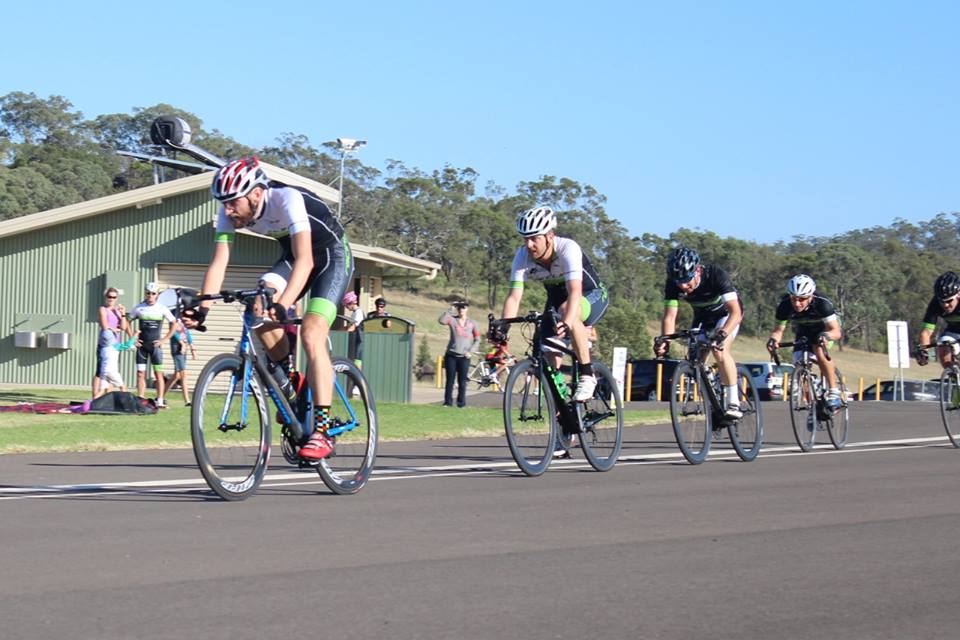 A mixed group with a few riders untested at A Grade level. With no Trent or Jared it looked like a good even group so no handicap was enforced and proved to be good call. We welcomed back to Eddie Groom to the big show and young Daniel Luke made his debut in A Grade. Also international visitor Fynn Brestol joined in, who hails from Germany. Although running a bit late Ross Freeman made the trip from Brisbane. The organisers generously allowed Ross to start 2 laps into the 40 minute race.

This brought the field to 10 and looked to be an interesting race ahead. With a number of different riders instigating attacks throughout the race none proved strong enough to stick. Solid digs by Pedr Harvey and Eddie Groom kept the pace high. This must have been the case throughout because normally strong riders Matt Locker and birthday boy Matt Sander were kept in check. Most riders were still present in the bunch when the bell rang. Matt Sander had a brain fade and decided to try his handle at Cyclocross, leaving the tarmac and losing contact with the bunch. The gallop to the line was a very close one indeed with some debate over the winner. The officials gave it to Richard Macavoy by tyre width from Pedr Harvey in 2nd. All is looking good for the 2 TLD riders and with the QRTS open series about to start. Our out of town visitors picked up the minor places, Fynn 3rd and Ross 4th. Thanks for visiting gents.

Only 8 riders lined up in a grade that until now has had the larger number of competitors. It turned out to be a one man race with former A grader Adam McCormick jumping off the front early. The bunch misread Adam and thought he would come back to them, not fully realising what a diesel he is. He put a fair gap on the field initially and the chase group expended a lot of energy trying to reel him back in. They almost succeeded several times but Adam found another gear to open the gap again each time and went on to win by a good margin. Doing a lot of the chase work was Tom Galbraith who picked up 2nd and was lead out nicely by fellow club mates Simeon Griggs, Ben Mackie, and almost birthday boy, Dave Swann, who placed 3rd.

A bunch of 10 riders lined up for C Grade. Due to no other D grade entrants Laura Brazier bravely lined up for her first start in C Grade in only her second Criterium race ever. Junior rider Ashley Luke and his dad Adrian decided to give C Grade a crack as well. Rod Lingard dropped back to line up with C after a not so successful stint in B grade also. A steady start slowly built up into a solid pace. Average speed for the race was around the 36kph mark. Small attacks came from Matt Haswell, Peter Mouatt, and David Capra but none succeeded. With 2 laps to go the lead bunch of 6 were resigned to a bunch sprint finish and the pace eased somewhat. First to go from near the back of the bunch, once they reached the base of the hill on the back straight, was Jon Lindley who gained a lead and held onto it until about 50 metres to go when Bass White and Matt Haswell went past to take first and second, with Jon filling the podium in 3rd. Well done to Bass who is still quite new to local racing.

We would love to see some more D grade cyclists next time to give Laura, who made the trek all the way from Warwick, some support and to race in her grade.

With the Sullivans away only 2 juniors were present to fly the flag. Dylan Hickey is getting stronger with every ride picking up 1st, and Halli West time-trialled well to keep Dylan in her sights finishing not too far behind. Again we would love to see the junior numbers build up and work towards the likes of the Toowoomba Junior Tour held in August again this year. If you are a parent and your child might like to race but timing or some other issue doesn’t suit please talk to us and we might be able to make some changes to suit you and your kids.