On Saturday last, 4th July, the Highfields Rollers Cycling Club conducted a road race in the area west of Goombungee and Haden. The course started at Colemans Road, headed north towards Haden, turned left onto the Kilburnie Road, and left again onto the road to Evergreen. After a couple of stiff hills, left past the site of the Brigalow Park School, and left at Mount Darry towards Oakey. A left turn onto the Pechey Road brought the cyclists back to the finish at Colemans Road, Goombungee.

The distance is a shade over forty two kilometres, hence the name. It travels through varying terrain and changing vegetation. The race was contested by three grades, A, B, and C.

The event included three contested hill climbs, and three sprints. Two of the ‘King of the Mountain’ contests were on the road to Evergreen, climbing from the Old Haden Peranga Road for the first, and to the Coolgardie Road for the second. A third was contested in the rougher country south of Mount Darry, near the property ‘Glenmore’. The sprints were just past Kilburnie, then at the monument marking the site of the Brigalow Park School, and lastly at Beneckes Road near Highland Plains.

The A Grade event featured a tussle, in the intervening hill climbs and sprints, between Tom Gough and Michael Illing; Tom won the King of the Mountain contest, and Michael was ‘crowned’ Sprint King. Tom won the finish at Goombungee, Trent West was second, and Michael third. The A Grade group completed the course in an hour and five minutes, at an average speed of over thirty nine kilometres per hour.

The A Grade event was sponsored by Bennett Page Cycles. On behalf of the bike shop Ryan Kennedy presented coloured glass coasters, and a bottle of wine, to all place getters. Sadly, no ladies competed, and Queen of the Mountain trophy was not presented. 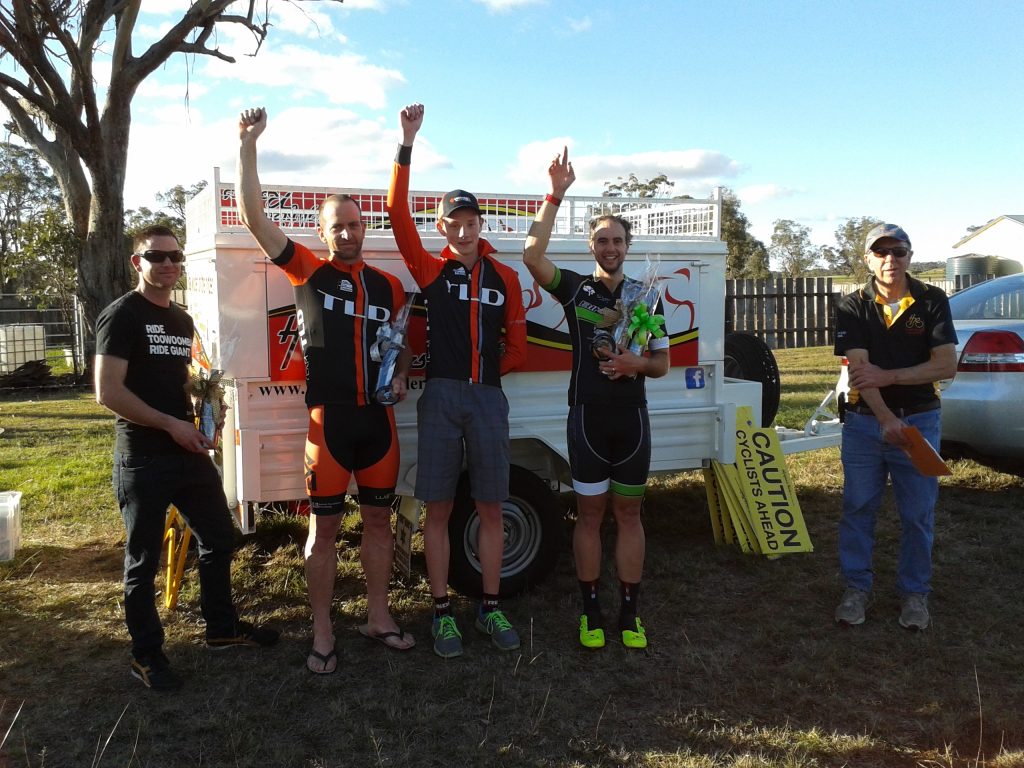 In the B Grade event Aaron Haycock ‘stayed on the front’ for the entire race, first at Goombungee and winning King of the Mountain, and Sprint King. Wayne Cooling was second, and Adam Grams third.

Having chosen the name ‘Mount Darry Marathon’, the organiser was keen to trace the source of the locality name. There certainly is no mountain! There was a Darry House B &B on the US west coast; not much help! There is a Castle Darry in ‘A Song of Ice and Fire’, and ‘A Game of Thrones’; still not much help. Darry is a common affectionate contraction of the name Darryl; even less help.

Marie A. Lucht’s book, ‘To Mount Darry with Love’ holds the answer:

“Mount Darry was named by an Irish settler, Nolan, who emigrated from Glen Darra, Achill Isle, in County Mayo, in north western Ireland. Glen Darra, roughly translated, means ‘valley of oaks’. Silky oaks did grow in the Mount Darry area. There is, however, little, or no resemblance between Glen Darra and Mount Darry. Nor, has Mount Darry ever, in historic times, looked like a mountain.”

Michael Nolan was a successful farmer, and is mentioned in Karen Handfords book ‘The History of Goombungee and District’. He had property west of the Brigalow Park School, perhaps served by what is now Kruger Mount Darry Road. Michael’s property was called ‘Silky Oaks’. He, and his wife Briget, are buried in the Evergreen cemetery.