On Sunday 14th of June at 2:30pm sharp Bikeline Racing’s A Grade club champion, Trent West aka “Weapon” will be having a red hot crack at the club’s Hour record. This event will be taking place at the Griffith Park Velodrome in Wattle Street North Toowoomba.

Trent is officially the first club member to attempt our HOUR record, so Trent will no doubt set that bar very high for future attempts by club members! Thanks Trent. 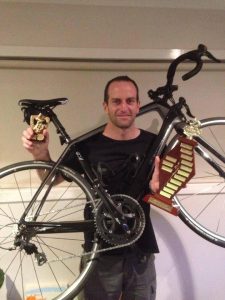 For those a little unfamiliar with the HOUR record, it is basically how many laps of the velodrome can a rider ride in exactly 60 minutes, from a stationary start. This is performed as a solo effort with no outside assistance. The number of laps completed is multiplied by the exact distance around the track at the black line, being 333.5m (yes, we have checked and double-checked the distance), to give average speed achieved for the hour effort.

Click here to learn more about the Hour Record.

Some cycling Hour Record trivia: the first known record was made in 1876 when the American Frank Dodds rode 26.508 km (16.471 mi) on a penny-farthing. We are confident Trent can ride a bit further than that on his carbon steed.

So let’s get as many folks out there to cheer Trent on. He’ll be digging deep into his own personal hurtlocker, working hard to maintain a steady  power output without going over his power threshold so as to limit the lactic acid produced, so I’m sure he’ll appreciate some encouragement being yelled his way on the day. What a great way to spend an hour or so on a Sunday afternoon too.

It gets even better. Because this is our first HOUR effort attempt, we will be running a special competition on the day. Simply turn up and guess how many laps you think Trent will ride in the hour and the closest guess will win a Bikeline Racing prize pack of 2 x Purist bidons, a BLR trucker cap and a BLR T-shirt. One entry per club member. Once the lap number is taken you will have to choose another lap number so get in early to pick and secure your lap number.

We hope to see as many of you there on Sunday June 14, 2:30pm at the Griffith Park Velodrome in Wattle Street.

Spread the word and GO TRENT!!!